“The harmonies are lush and dark in Russian style, though periodically the shadows disperse as in a cloud-break and the sound brightens. The effect over the whole hymn is of a slow revelation of light and warmth over an ancient musical ground.” (Willamette Week)

Ancient melodies and a sixth-century poetic meditation form the ground of Ivan Moody’s setting of The Akáthistos Hymn, one of the most beloved devotional hymns in the Orthodox tradition of Christianity.

The Akáthistos Hymn is a meditation in 24 stanzas (one for each letter of the Greek alphabet) on the cosmic role of the Virgin Mary as mother of the incarnate Word of God. The popularity of the devotion is especially associated with the raising of the siege of Constantinople in the sixth century, a miracle attributed to the intervention of Mary as the protector of the city. In gratitude, the citizens of Constantinople gathered in the Holy Temple of Saint Sofia and sang the hymn while standing (hence the name Akáthistos, which means “not sitting”).

Moody’s setting makes use of a celebrated contemporary English translation by Bishop Kallistos Ware and Mother Mary; the refrains are sung in Greek to traditional Byzantine chant, with its characteristic microtonal ornaments. Moody is the first to compose music for the entire hymn since the Middle Ages.

iClassics.com: What was the genesis of this composition?

Ivan Moody: Having worked with Cappella Romana in the past – they gave the North American premiere of my oratorio, Passion & Resurrection, for example – I wanted to write a large-scale work especially for them. The Akáthistos Hymn is one of the great poetic compositions of the Orthodox Church, and I see that it is increasingly used in the Roman Catholic Church too. It is full of astounding imagery that just cries out for music.

Much of your music comes out of your interest in the traditions of the Orthodox church. 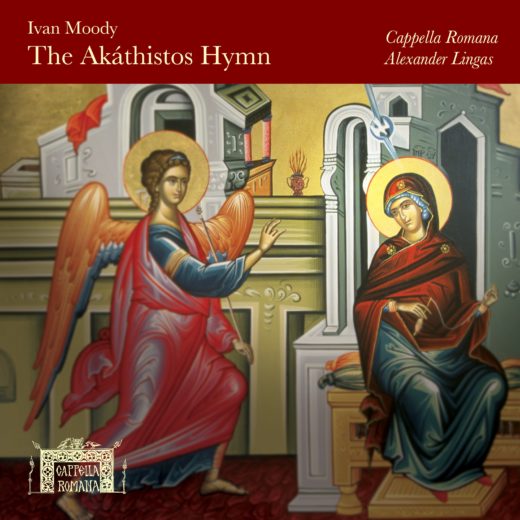 I’m a practicing Orthodox Christian; when I set words from our liturgical tradition, I’m always keenly aware of the historical riches we have stored up in musical terms. As a performing church and concert musician I’ve researched a number of Orthodox musical traditions, and feel privileged to be in a position to absorb all this.

However, I’m not Russian, or Greek, or Serbian: I was born in London, England. I think that the challenge for me is to reconcile all those musical traditions, which I love, with my own heritage and my own voice. I don’t do this consciously – if I may say this without sounding too pompous, there’s a period during the course of composition when one is just “digesting,” thinking subconsciously, and then all these things come together really quite spontaneously. If it doesn’t work that way, then it’s a sure sign that I should throw what I’ve written away…

How did you go about setting the Akáthistos Hymn? What were some of the special challenges?

Liturgically, nowadays most of this is intoned by a priest or deacon, the choir singing just the opening and closing sections and the refrains (“Rejoice” and “Alleluia”). However, it was not always thus: there are some extant mediaeval settings of the entire hymn in Byzantine chant. So, I bit the bullet and decided to set the whole text. The finished piece lasts for more than 90 minutes, making it the largest piece I’d ever written.

The first and biggest challenge was simply finding musical notes to correspond to the richness of the text! It’s so full of images that one can hardly find music for each idea – that would simply become tediously madrigalistic. It was a question of responding, simultaneously, to words, spiritual “ambience” and long-range architecture.

The second was how to structure the piece: it’s divided into four sections, and that helped me organize a harmonic scheme, but there are numerous sub-divisions, so one strategy that I adopted right from the beginning was the alternation of three inter-related styles. One was audibly related to Russian mediaeval music, the other was clearly Byzantine, and the third was, well – me. And that “me” is, in part, a result of those other two.

How did the recording come about?

Alex Lingas thought initially that I was nuts to undertake such a project, but once he had the score in his hands, he programmed it for Cappella Romana and made it a real success. I was present at the world première, in Portland OR, and it was quite one of the most extraordinarily moving occasions of my life. It was repeated in a subsequent concert season, and enthusiasm was then running at such a high level that the idea of recording it came about. If anyone was going to record it, Cappella was the choir.